Last week I made Lidia Bastianich’s Butternut Squash Gnocchi with Sage Brown Butter, from October 2010 Bon Appetit magazine. This was my first foray into making pasta, and although it didn’t turn out perfectly, it won’t be my last. The next time I make gnocchi, I will start with a basic recipe. Using add-ins, especially watery ones like squash, is best suited for people with some experience.

Nonetheless, I made it anyway. I got to my parents’ house mid-afternoon and made the realization that I had no idea what I gotten myself into. Luckily, my mom had already cooked the squash, but I had to reduce it to get the excess liquid out. It’s a fairly simple process; it just takes patience and the willingness to rely on your gut instinct.

Around the time I was mixing all the ingredients together for gnocchi, I had an audience. My older sister and mom were also in the kitchen, both asking if I needed anything, yet keeping their distance. They sensed my desire to get it right and my fear of serving squash glue for dinner.

My mom coached me through it, even though at some point she wondered aloud why I had chosen to make gnocchi with squash for my first go-around. I pointed out that to her that when I suggested the menu that she didn’t bat an eye and went so far as to say, “That sounds great.”

Once we got our ropes of gnocchi dough lined up and then cut, we rolled the gnocchi along the back of a fork, pressing ever so slightly, and giving it an indentation, a place for the brown butter with sage to rest.

We had finished our gnocchi after what seemed like an extraordinarily long amount of time. According to the Bon Appetit recipe, you’re supposed to cook the gnocchi for 15-17 minutes. That has to be a misprint. Seven minutes is about right. I don’t know what would happen to the gnocchi if you boiled it for 15-17 minutes, but I imagine it wouldn’t taste very good and the texture would be awful.

I browned the butter and added the sage. The smell is incredible. It’s what fall should smell like. You stir in the gnocchi at the end to get it coated with the butter and sage and serve it with Parmesan. It was an amazing meal. It wasn’t perfect, and Lidia probably would have been more impressed with people trying her recipe than the actual result, but it’s the thought that counts.

Cut squash lengthwise in half; discard seeds. Places quash halves, cut side up, on baking sheet and brush with oil. Roast until squash is very tender when pierced with skewer and browned in spots, about 1 1/2 hours. Cool slightly. Scoop flesh from squash into processor; puree until smooth. Transfer to medium saucepan; stir constantly over medium heat until juices evaporate and puree thickens, about 5 minutes. Cool. Measure 1 cup (packed) squash puree (reserve remaining squash for another use). Meanwhile, cook potato in medium saucepan of boiling salted water until very tender, about 20 minutes. Drain. While potato is warm, press through potato ricer into medium bowl; cool completely. Measure2 cups (loosely packed) riced potato (reserve remaining potato for another use).

Line 2 large rimmed baking sheets with parchment. Sprinkle parchment lightly with flour. Working with 1 dough piece at a time, roll dough out on floured surface to about1/2-inch-thick rope. Cut rope crosswise into 3/4-inch pieces. Working with 1 piece at a time, roll gnocchi along back of fork tines dipped in flour, making ridges on 1 side. Transfer gnocchi to baking sheets.

Repeat with remaining dough. Cover loosely with plastic wrap and chill at least 1 hour. DO AHEAD: Can be made 6 hours ahead. Keep chilled.

Working in 2 batches, cook gnocchi in large pot of boiling salted water until very tender, 15 to 17 minutes (gnocchi will float to surface but may come to surface before being fully cooked). Using slotted spoon, transfer gnocchi to same parchment-lined baking sheets. Cool. DO AHEAD: Can be made 8 hours ahead. Cover loosely and chill. 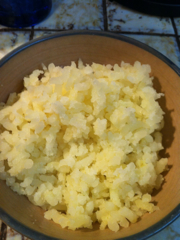 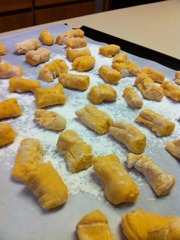 Other Things I Say…